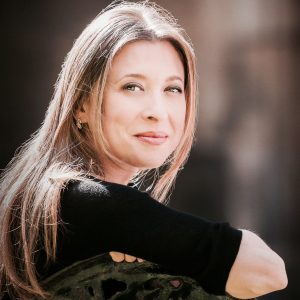 She is a lyric soprano with coloratura, which gives an easiness and brightness to her voice allowing a varied repertoire.

Along with classical and opera music she enjoys singing contemporary music and in this regard has worked with Jannot Heinen (Luxemburg) and in Bulgaria took part in the contemporary music festival ‘Musica Nova’ as well as working with Artin Potourlyan. Oksana is keen to promote Slavic music in Europe and as such has sung concerts of Russian, Bulgarian and Ukrainian music in Edinburgh, Glasgow, Baden Baden and even as far North as the Shetland Islands.

From a very early age Oksana was passionately interested in music and persuaded her parents to send her to the local Music School and then Music College where she graduated with distinction in ‘Choral Conducting’. She then furthered her studies with Prof. L. Stefanova at the Sofia Music Academy in Bulgaria years (1997- 2002) and received a Bachelors and a Masters degree. During her time in Sofia she took part in a large number of concerts and performances and won prizes in Academic and National competitions. She was a winner of Academic and National competitions as well as a laureate of the National Operetta Competition ,Mimi Balkanska’ held in Sofia. In 2000 she was awarded the ‘George Soros Scholarship’ for her outstanding study.

After graduating with ‘high achievement’ she decided to continue her education and moved to Germany to study under Prof. M. Schiml (2004-2006) at the Musikhochschule,Opernschule, Karlsruhe. While studying there she attended master classes with L. Bizzi and H. Zadek.

Prior to completing her studies in Germany, she participated in a number of concerts and sang Belisa in the Paisiello Opera ‘Il re Teodoro in Venezia’ performed in Karlsruhe Operahaus.

In 2008 she completed a Pg dip in opera singing in the RSAMD under Patricia Hay.

Since 2010 Oksana is Deputy Conductor of Glasgow male Philharmonic Choir.

As well as her native Russian and Ukrainian tongues, Oksana speaks English, German and Bulgarian fluently and Italian at an intermediate level.