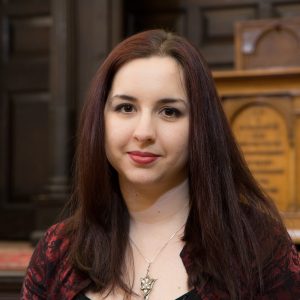 Bulgarian-born pianist Silviya Mihaylova is currently based in Glasgow, UK where she enjoys busy life as a solo performer, chamber musician and a teacher.

Her musical talent was discovered when she started playing piano at age of 7 as part of her school programme. At the age of 10 she won 3rd prize in the ‘Dream in seasons’ competition in her home town and soon after that she started lessons with Mrs. Rositza Ivancheva – one of the most renowned piano teachers in Bulgaria. A year later she was accepted into the National School for Music and Dance art “Dobrin Petkov” in Plovdiv, Bulgaria (NSMDA).

At age of 18, she graduated NSMDA with honours, taking both a Secondary Education Diploma and a Certificate of Professional Qualification with distinction and was awarded the Special award from NSMDA for serving many good causes and “Penka Popova” Special prize for high achievements in the academic subjects. In 2011 she graduated Royal Scottish Academy of Music and Drama with Bachelor of Music Performance with the Honours of The First Class, studying in Prof Fali Pavri’s piano class and in 2012 she obtained her Master of Music Performance Degree from the Royal Conservatoire of Scotland, finishing the two years course in only one intensive year.

Her interests in music vary from Baroque to Film Music and all in between and she enjoys performance in all of its forms, from being on stage to organize events herself. Silviya has been part of many ensembles – the RSAMD Baroque ensemble, Sonic Trio, MacGregor-Mihaylova Piano Duo, Mavrodii-Mihaylova Duo, Kyosev-Mihayova Piano Duo, etc. She’s been frequently performing at festivals like Fringe, RCS Piano Festival, PLUG Festival, Young at heart festival, NSMDA Summer Concerts and more and only in the past few years she performed on tours along Scotland, England, Shetland Islands, Grand Canary islands, India and Bulgaria.

In 2008 Silviya became part of Live Music Now Scotland, organisation found by Yehudi Menuhin. At the time she was 20 years old, being one of the youngest musicians ever to be accepted in the scheme. LMN allows young musicians to bring the joy and inspiration of live music to those who have limited access to conventional music-making. In 2013 Silviya joined the Mehli Mehta Music Foundation (created in honour of Zubin Mehta’s father) as. Following this Silviya’s goal on every concert is to engage her audience, to make them part of the performance and to give one unforgettable experience.

From 2014 Silviya is also a part-time staff at the Royal Conservatoire of Scotland.